More Than 100 Years of Service


In the 1850's, the Santa Cruz downtown started seeing a growth in commercial type buildings; boarding houses, shops, restaurants, drug stores, tanneries, etc. Though fires were not uncommon, they rarely destroyed more than one piece of property at a time.

In 1857, the Santa Cruz citizens organized a volunteer fire department and purchased a hand drawn hook and ladder. For reasons unknown, the organization did not last as long as the hook and ladder wagon, which slowly deteriorated when left to the weather. By the 1860's they were no longer a functioning fire company.

A fire at the San Lorenzo House in 1865 made the City fathers realize they could lose the entire City, made mostly of wood, to a conflagration. (The 27 room Franklin House was destroyed by fire in 1866, on Memorial Day). The move was afoot to organize a firefighting capability, and in 1877 a new hand drawn hook and ladder was placed in service at City Hall, located on the Front Street site of the McPherson Center for Art and History today. Thus, the Santa Cruz City Volunteer Fire Department was born. Staffed by volunteers, the men of the hook and ladder company would pull the thousand pound unit to fires, which was mostly used for above ground rescues and salvage; that is, removing valuables before the fire consumed them, thus minimizing the property owners' losses. 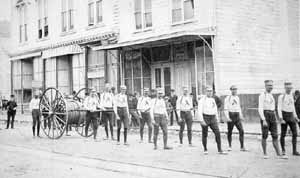 Over the years, a water system was developed for the City and it became practical to have hose companies (the Alerts, Pilots, Reliefs, Kirbys, Krons and Pogonips) organized. Most of these hose companies were established by businesses for the protection of those businesses and were staffed voluntarily by the employees. They would generally all respond to large fires for the common good, occasionally racing each other for the honor of being "first to the fire", creating competition among them.

In 1878, a fire bell was purchased to alert all volunteers of a fire. It was placed in a tower behind City Hall. At a cost of $490, it rang for some of Santa Cruz' largest fires, calling volunteers to duty. It was retired in 1940 and is now located in the clock tower at North Pacific Avenue and Water Street. The competition among companies, to be the first to the fire, became organized in the 1880's. It was quite a social event and a matter of pride for the communities. The Pilots, Alerts, and the Hook and Ladder won local contests competing against Watsonville, Hollister and other central California hose teams. The Alerts won the State Championship held in San Jose in June 1882, winning $1500 in coin. Starting in 1881, a competition began between the volunteer departments located in Watsonville and Santa Cruz, (approximately ten companies all totaled). The annual competition was held in various locations in the area including Watsonville, Santa Cruz, San Jose and Hollister. A "diamond belt" was commissioned to serve as the trophy. Made of silver, with a depiction of a fireman on a ladder rescuing a victim, it was beautifully made and encrusted with diamonds. Each year the winning Hose Company's name was engraved on the belt and proudly displayed until the competition the following year. The last competition occurred in May of 1886 and won by the Pajaro hose company. That volunteer group joined with three other volunteer companies to become the Watsonville Fire Department. The Diamond belt remains in their trust to this day.

In 1887, the Hotel Swanton House burned to the ground (then the tallest building in the City), along with the Eagle Livery Stable, a Chinese wash house, and the Hotel Swiss House. Also during 1887, the Santa Cruz House was destroyed by fire. 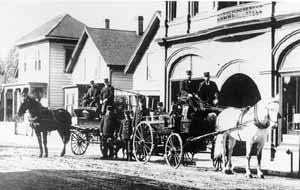 By 1894 the volunteers had horse drawn hose wagons, the competition had died out and membership in the companies waned. On April 14, 1894, a fire began on Pacific Avenue and when it was through, it had destroyed a City block between Front Street and Pacific Avenue, and from Cooper Street to the Flatiron Building. It required firefighters and equipment from Watsonville and San Jose, transported by special train, to help extinguish it. This remained as the longest "mutual aid response" for San Jose for nearly seventy five years! This fire convinced the City fathers to establish a paid fire department in October 1894. The Pilots had lost their firehouse on Pacific Ave. in the great fire and using some of their capital as well as the City's, a firehouse was built on Church Street and the volunteer equipment was relocated there.

The hose wagon pulled by a horse was the primary piece of equipment, and one man was paid to remain in the firehouse on duty. Volunteers became "Call Men" and for a monthly wage, plus a "per fire" fee, they were still relied upon to provide the manpower to fight fires. However, the thought of paying a man to sit and wait for the rare fire must have annoyed the City fathers, so the driver was directed to water the dirt streets of downtown Santa Cruz to keep dust down. When the fire bell sounded, he would unhitch the horse from the water wagon, ride it to the station, hitch the hose wagon to the horse and drive it to the fire, where volunteer and paid call firemen would meet him to fight the fire.

In 1895 a large fire destroyed three businesses: the Newport Restaurant, McKeans Photo Gallery and the California Market. The Palm Theater burned in November of 1897. The Town Clock was destroyed, in the IOOF building, in May 1899. On June 22, 1906, Neptune's Casino burned to the sand two years after it was built. On June 12, 1912, the huge Sea Beach Hotel was destroyed by fire. On March 9, 1909 the Eastside Lumber Mill burned.

During one of these fires, the wagon driver was out watering the streets when a fire broke out. Finding no one at the station, the townspeople pulled the wagon to the fire before the driver could get back to the firehouse. This motivated the City to hire another driver so that one would remain in quarters at all times.

In 1911, unable to resist progress, the City of Santa Cruz invited bids for the first piece of motorized fire equipment, and in 1912 received delivery of a fine American LaFrance chemical wagon. This engine shared quarters on Church Street with the hook and ladder from the volunteer days. About this time, more firefighters were hired, working 24 hour shifts, seven days a week. 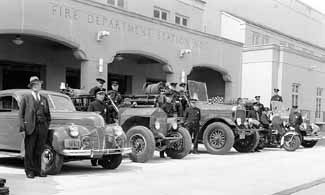 In 1940 the City had a new fire station built on Center Street, using the latest in modern fire house design. It had three bays for equipment and facilities to accommodate the 16 man department. In 1949 the fire department bought its first aerial ladder truck, for a cost of $28,650, a mandatory piece of equipment for above ground level firefighting. Forty five years later, the City purchased a new 104 foot aerial ladder truck for more than half a million dollars. In 1972 there was another fire on Pacific Avenue, destroying many businesses and severely taxing the City's fire protection service.

The fire department began responding to medical type emergencies in about 1915, mostly providing transportation to doctor's offices or hospitals. During the 1970's, all firefighters were trained as emergency medical technicians and the call volume skyrocketed, providing victims with treatment in the field that had previously only been available in hospital emergency rooms.

With the advent of hazardous materials, new training methods are preparing firefighters to handle emergencies unrecognized in the volunteer days of 1880.

All area departments, including Santa Cruz fought the wildfire in the Lexington Reservoir area. It was a week long effort that taxed local agencies and devastated the summit area.

The earthquake of October 17, 1989 severely tested the fire department with house fires, medical emergencies, building collapses, natural gas leaks and for a time, isolation. Help came from all over the country to assist with the rescue effort and our predicament was broadcast worldwide.

The department began providing confined space rescue in 1998. This required extensive training and specialized equipment that allows firefighters to provide rescue to victims in areas considered to be immediately dangerous to life and health. Drills have been conducted placing rescuers nearly thirty feet underground, in pipes no more than 24" diameter. This is a very dangerous procedure requiring courage and attention to detail.

In the fall of 1999, the department began providing Advanced Life Support (ALS) Services in the form of Firefighter/Paramedics. All four fire stations currently provide ALS service. This will greatly increase the survivability of victims of severe trauma occurring in the city of Santa Cruz.

In 2015 the UCSC Fire Department consolidated with the Santa Cruz Fire Department.  The consolidation increased our coverage to include the university campus and added another station and nine more firefighters to our department.

100+ years after being organized as a paid fire department, Santa Cruz Firefighters respond to nearly 8000 emergency calls per year, from four stations with at least 15 firefighters on duty 24 hours a day, 365 days a year.

It is with this rich historical heritage, that the Santa Cruz Fire Department proudly celebrated its 100th Anniversary as a professional fire department during the month of October 1994. The Department continuously strives to improve the services provided to the citizens and visitors of Santa Cruz, and looks forward to another century of community wide, all risk protection services provided by our highly motivated and professional firefighters.