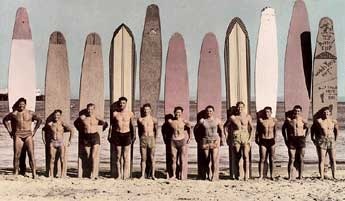 SANTA CRUZ SURFING MUSEUM:
Overlooking internationally renowned surfing hotspot Steamer Lane, this little gem of a museum has photographs, surfboards, and other interesting artifacts tracing over 100 years of surfing history in Santa Cruz. The museum shop specializes in great surfing books and surfing related items.
HELP KEEP THE LIGHTS ON IN THE LIGHTHOUSE AND MAYBE SOME HEAT TOO:
The Santa Cruz Surfing Club Preservation Society (SCSCPS) invites you to contribute to the Santa Cruz Surfing Museum. The museum is housed inside the Mark Abbott Memorial Lighthouse on Lighthouse Point in Santa Cruz. We are establishing a funding base for ongoing staffing, maintenance and selected opportunities to enhance the exhibits within the museum. Your donations will be used efficiently by supporting efforts to continue the operation of the museum, keeping it open to the public to view and enjoy our rich surfing heritage in Santa Cruz.

The SCSCPS is a California Non Profit 501 (c) (3) Benefit Corporation and each volunteer member upholds the mission and intent as follows:

To protect and preserve our rich surfing heritage and to ensure historical artifacts are maintained and preserved for the enjoyment and education of current and future generations.

LIGHTHOUSE SOLID BEAM LIGHT: The switch to a solid beam from a blinking light was because of a cooperative effort between the City of Santa Cruz and the Coast Guard inspired by lighthouse aficionados Bill Simpkins and Jim Thoits. Although the lighthouse is owned by the city, the light itself was owned by the Coast Guard. At one point the Coast Guard replaced the solid beam with a blinking light. Simpkins and Thoits approached the city in hopes of bringing back the solid beam for historic and aesthetic reasons. The only hitch was that a change in ownership of the light had to be agreed upon with the city assuming responsibility for owning and maintaining it. The Parks and Recreation Commission and City Council approved the ownership change, lighting the way for the return of the solid beam.

It is expected that the light will last 20 years or more because it is housed indoors and will better withstand weather and power outages. Carol Scurich, Recreation Superintendent said, "This was a great collaboration involving the community, federal and local agencies. The lighthouse is an iconic symbol for Santa Cruz and Parks and Recreation is proud to maintain it."

SANTA CRUZ FORMALLY DEDICATED AS WORLD SURFING RESERVE, APRIL 27-28, 2012: The local and international communities came together to commemorate and celebrate Santa Cruz as a World Surfing Reserve, in a series of dedication events that included a number of festivities, from an “Evolution of the Wetsuit” fashion show to a spiritual paddle out at Pleasure Point. The official dedication event took place in front of the Santa Cruz Surfing Museum at Steamer Lane, and featured a collection of inspiring speeches from local surfing and environmental leaders.

“The Santa Cruz World Surfing Reserve implicitly underscores the importance of our waves and coastline,” said Pat O’Neill, President and CEO of O’Neill Wetsuits, a supporter of the reserve. “It provides additional worldwide recognition to what we have long known and cherished - that Santa Cruz is a unique special place worth protecting for our families and future generations.”

The heralded Santa Cruz surf zone – designated as the area from Natural Bridges on the western end to Opal Cliffs just east of Pleasure Point – joins just three other sites to claim such status—Malibu in California, Ericeira in Portugal, and Manly Beach in Australia.

On Friday night, the community held a celebration at the Cocoanut Grove at the Santa Cruz Wharf, which included a show tracing the evolution and development of the modern surfing wetsuit from the 1950s to present, using models showing off suits from each era. Saturday morning at Pleasure Point, Ohlone Native American Indian Elder and Shaman Patrick Orozco led a moving blessing on the beach that was followed by a beautiful song performed by local musician and surfer Ashley Lloyd. Surfers then paddled out into the kelpy waters of Pleasure Point where they united in a circle and gave thanks to the natural and cultural surfing heritage of Santa Cruz. During the paddle out, local icon Jack O’Neill came out onto the balcony of his house at Pleasure Point and saluted the surfers, which was met by a loud chorus of cheers from all the surfers in the water. Finally, on Saturday afternoon, community members gathered at the Lighthouse lawn at Steamer Lane for the official dedication ceremony, and listened to brief talks from local leaders on the importance of protecting Santa Cruz’s waves and coastline.

"We are so blessed in this community," said Santa Cruz Vice-Mayor Hilary Bryant, who is a surfer herself and serves on the Santa Cruz Local Stewardship Council, the group that will oversee the Reserve. "As important as our parks are, the waves are important to us too."

Santa Cruz received its approval as a World Surfing Reserve in February 2011. Its application ranked highly on all World Surfing Reserve criteria: wave quality and consistency, unique environmental characteristics, surf culture and history, and community support. More than 23 surf spots dot the region’s coastline, with a handful of iconic locations such as Steamer Lane and Pleasure Point. The cold-water marine environment not only provides a playground for surfers, but also provides habitat for one of the most robust coastal and marine ecosystems on the planet. Santa Cruz’s importance in the history of surfing is undeniable. It was the birthplace of surfing on the North American continent and played a pivotal role in the creation and development of the surfing wetsuit, which opened up surfing to new regions around the world.

"This honor is perfect for Santa Cruz,” said Robert “Wingnut” Weaver, a Santa Cruz World Surfing Reserve ambassador. “We are ground zero for surfing on the mainland. No town deserves it more."

At the end of the dedication ceremony, the members of the Local Stewardship Council signed a plan for the ongoing management and stewardship of the Santa Cruz World Surfing Reserve. This plan outlines how the group would respond to threats that may arise, what type of stewardship activities the group will carry out, and how the group will reach out to the general public to provide education about Santa Cruz’s increbile surfing resources and how to protect them.

“Santa Cruz is a leader not only in the surfing world but also in maintaining a tremendous environmental legacy,” said Save The Waves Board President and World Surfing Reserves Executive Committee member Dean LaTourrette. “We’re excited to honor this heritage and to work with the community to build increased layers of environmental protection.”

SANTA CRUZ SURFING MUSEUM CELEBRATES SILVER ANNIVERSARY ON MAY 27, 2011: The Santa Cruz Surfing Museum celebrated its 25th anniversary with official ceremonies, surf music, and an anniversary cake created by Marina Sousa of Just Cake and Food Network fame. Santa Cruz Surfing Club Preservation Society (SCSCPS) members Dan Young, Kim Stoner and Mayor Ryan Coonerty and other dignitaries spoke about the intrinsic value of the museum and the importance of its future. The SCSCPS is raising funds to keep the museum open. For information on how to donate, see above. 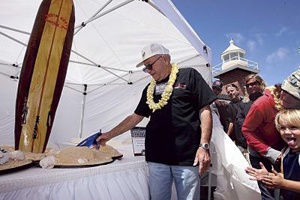 INTERNATIONAL TOURISM OFFICIALS TOUR THE SANTA CRUZ SURFING MUSEUM, MAY 28, 2011:  SCSCPS members Dan Young, Harry Mayo and Boots McGhee led a tour for 26 tourism officials from Brazil, Chile, England and Asia. SCSCPS hopes that increased tourism will be a boon for the museum, which is dependent on donations to remain open. See above for information on how to donate. 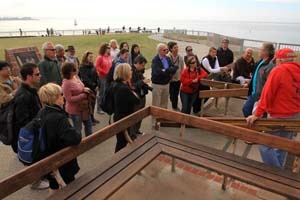 Santa Cruz Surfing Museum host International Tourism Officials: Tourism officials from around the globe were charmed by the uniqueness of the surfing museum and the quality of its exhibits. Photo courtesy Boots McGhee.