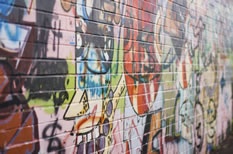 NOT ALL GRAFFITI IS GANG-RELATED.

While some forms of graffiti are clearly gang-related, much of it isn't.  In areas where graffiti is prevalent, gang and tagger graffiti are the most common types found.

There are four major types of graffiti:

Some tagger graffiti may involve creative expression, providing a source of great pride in the creation of complex works of art. Most taggers seek notoriety and recognition of their graffiti–they attach status to having their work seen. Thus, prolonged visibility due to the sheer volume, scale and complexity of the graffiti,§ and placement of the graffiti in hard-to-reach places or in transit systems, enhance the vandal's satisfaction. Because recognition is important, the tagger tends to express the same motif–the graffiti's style and content are replicated over and over again, becoming the tagger's unique signature.

Tagger graffiti is not usually used to mark territory like traditional gang graffiti. Tagging on walls is a competition to those involved. The more a person tags, the more recognition and respect they'll get from other taggers. Taggers are responsible for millions of dollars in damage to private and public property annually.

Have you seen graffiti in the City that you want to report?

To get information on the City of Santa Cruz's Graffiti Abatement program, click here

Some information provided courtesy of Imagine Media Solutions and used with permission by SECURE in Clarksville, TN