WHERE WILL IT FLOOD IN SANTA CRUZ?

Flooding along the coast of Santa Cruz may occur with the simultaneous occurrence of large waves and storm swells during the winter. Storm centers from the southwest produce the type of storm pattern most commonly responsible for the majority of serious coastline flooding. The strong winds combined with high tides that create storm surges are also accompanied by heavy rains. When storms occur simultaneously with high tides, flood conditions including flooding at the mouth of the San Lorenzo River are exacerbated.

There are several smaller creeks in the City that are subject to periodic flooding. Flooding is a hazard on the lower reaches of Moore Creek where only shallow stream channels are present, the lower portion of Arana Gulch, north of Santa Cruz Yacht Harbor, and along portions of Branciforte and Carbonera creeks. In these areas there is minimal impact on public structures and facilities and only a few residential structures are within these flood zones.

WHAT IS THE STATUS OF MY PROPERTY?

The FEMA Flood Insurance Rate Map (FIRM) is an official map of a community for which the Federal Emergency Management Agency (FEMA) has delineated the Special Flood Hazard Area (SFHA) and the risk premium zones applicable to the community. All known areas of the City subject to natural flooding hazards have been designated and mapped by the (FEMA), such as the 100 year floodplain boundaries which appear on FEMA’s Flood Insurance Rate Maps.

The City Planning and Community Development Department has developed an aerial photo which displays flood elevations from FEMA maps and additionally provides information concerning the flood insurance zone designations of these properties. This information is available at the Planning and Community Development Department, Room 206, City Hall Annex, 809 Center Street, Santa Cruz, CA. 95060. They are open from 7:30 AM to 12:00 PM, Monday through Thursday or where appropriate by phone at 420-5100. 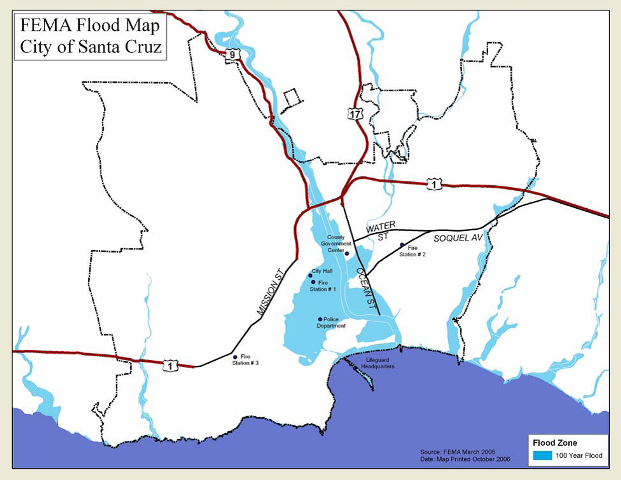