The City of Santa Cruz is installing the first green “bike box” in Santa Cruz County at the intersection of Seabright and Soquel avenues to help prevent right hook collisions by positioning people on bikes in front of drivers so that they are clearly visible. Right hook collisions, in which drivers turn right without checking for cyclists in the bike lane, are a common cause of bike/car crashes. Bike boxes have already been installed throughout 20 U.S. cities including San Francisco, San Luis Obispo and Chicago.

How to Use When Biking: Use the new bike box at Seabright and Soquel if you wish to travel straight on Seabright or make a left turn onto Soquel. When the light is red, use the bike lane to proceed to the front of the intersection and move into the bike box. Stop before the crosswalk and position yourself directly in front of waiting automobiles. When the light turns green, move through the intersection ahead of traffic. Use hand signals to tell drivers which way you’re turning, and move into the bike lane or to the right side of the street once you have passed through the intersection.

How to Use When Driving:  If you approach the intersection of Seabright and Soquel and the light is yellow or red, stop at the white stop line behind the green bike box. Keep the bike box clear to allow cyclists to use it. If people on bikes are in front of you in the bike box, allow them to travel first through the intersection. Check for cyclists before making the right turn to continue on Seabright Avenue.

Below are two examples of bike boxes in San Francisco and Portland. 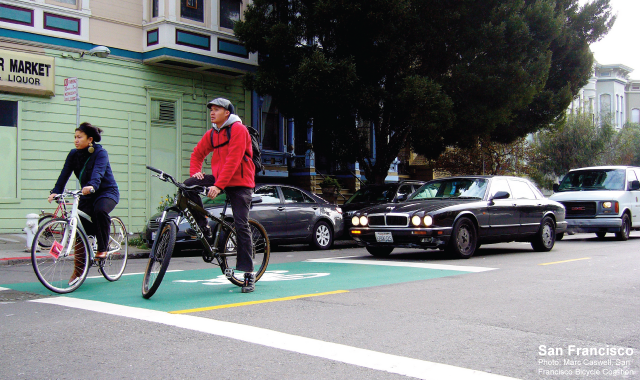