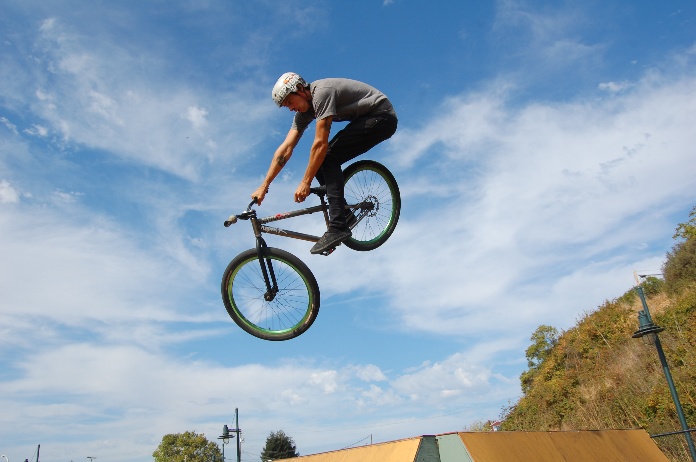 BIKE PARK HOURS AND RULES
Open 9 a.m. to sunset daily. All bike riders must wear a helmet and safety pads. Skateboarders, in-line skaters and scooters are not allowed in the bike park. The bike park will be closed during rainy or wet conditions.

SPECIAL THANKS
Special thanks to the Bicycle Trip for funding the park. The concept of a temporary bike park was initiated by Jesse Nickell, Vice President of Barry Swenson Builders. The layout and design was created by Jesse and Jarrod Allen, a local pro bmx-rider. Barry Swenson Builders, with the guidance of Jarrod Allen and assisted by volunteers, improved the existing ramps and constructed exciting new features, including a bowed 8' high wall ride and 2' and 4' jumps.

Thank you to all of the volunteers who contributed ideas to the design and helped to build the bike park features. A special thanks to Ryan Phinn, Jeremy Glum, James Carpenter and Brad Davies, who worked many long volunteer hours to help build the park. Also thanks to the Harbor High Bike Team and their families who participated in the bike park improvements.

Thank you to businesses who donated in-kind to the Bike Park construction:

Thank you to participants in the Bike Park Opening Event on May 7, 2007