Outdoor exercise continues to be allowed in parks and open spaces while following safe distancing guidelines. However, large gatherings are a violation of shelter-in-place orders meant to protect public health. In consideration of everyone, if the area you want to visit is crowded, consider altering your schedule to do so when there are fewer people.

Be advised that due to reduced staffing levels, shared park amenities are not being regularly cleaned or sanitized.

List of amenities and park features that have been affected countywide. 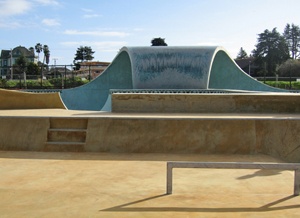 SKATE PARK RULES
Open 9 am to sunset daily. All skaters must wear a helmet, elbow pads, and knee pads and have skateboards and in-line skates with composite wheels only. Bicycles, scooters, and metal skate wheels are not allowed in the skate park. The skate park will be closed during rainy or wet conditions.

CITY NAMES NEW SKATE PARK AFTER KEN WORMHOUDT
Before his passing in 1997, Ken Wormhoudt was the world’s premier skate park architect and continues to be well recognized as the pioneer of skate park planning. His approach, which his son, Zach Wormhoudt follows to this day, is to involve local skaters in designing their own park, with the architect providing a realistic sense of options and helping the skaters to select and arrange the features which meet their needs. Ken would provide the skaters with modeling clay and have them work together to design their own ideal park.

Ken Wormhoudt designed and oversaw the construction of what is generally considered to be the first skate park in the world at Derby Park in Santa Cruz. After completing Derby Park, Ken, initially on his own and later with his son Zach Wormhoudt, went on to design and construct over 80 municipal skate parks and provided skate park facility planning and design consulting for over 460 skate parks in municipalities around the world. Ken and the firm he created with Zach Wormhoudt have won numerous awards for excellence from the Skate Park Association, U.S.A., the California and Nevada Parks and Recreation Societies, the American Public Works Association, and other professional and civic organizations.

Ken Wormhoudt was a skate park pioneer who earned a place in skate park history and made invaluable contributions to the local community. The naming of the new skate park in his honor is a tribute to his life, his family and many friends, and the community.

SKATE PARK HISTORY
Since 1996, the City had been striving to fulfill the recreational need for a permanent skate park. Derby Park, constructed over 25 years ago, did not meet the demand for a contemporary skate park, and the temporary Fun Spot skate park was intended as an interim solution.

In March 2006, the City received four proposals to construct the Mike Fox Skate Park project. The lowest cost proposal received for the project was submitted by AJ Vasconi Engineering. This contractor was highly qualified and had constructed numerous skate parks throughout California, including the recently completed skate park in Pacifica.

HISTORY OF PUBLIC ART PROJECT
In November, 2005, the Public Art Committee issued a request for proposals (RFP) for public art at the soon-to-be-built skate park at Mike Fox Park. The RFP stated a preference for proposals that involve members of the skate community in the project design, fabrication or installation. To attract local or "emerging" artists, the Public Art Committee held an informational meeting prior to the submission deadline. At this meeting, skate park designer Zach Wormhoudt provided more detailed information about the project and UCSC Assistant Faculty member Dee Hibbert-Jones (also a Public Art Committee member) provided advice and direction on submitting public art proposals.

Patrick Haywood - Concept drawing excerpted from proposal
Local artist Patrick Haywood has an MFA in Studio Art, is the Photography Studio Manager at the California College of the Arts in Oakland and an adjunct lecturer in the Cabrillo College Photography Department. His proposal is to create an approximately 12' x 6' photographic portrait of 150 members of the local skate boarding community. He plans to work with local skate shops to host "photo days", asking each person photographed to answer, in writing on the photograph, the question, "What's the worst that could happen if I went for it." The finished piece will consist of 150 photographs printed on outdoor tiles and installed in a fabricated steel frame. Particular attention will be paid to photographing a diverse cross-section of the local skateboarding community, with a goal of promoting a sense of ownership in and stewardship of the park.

Dave Gardner - Concept drawing
David Gardner has been "an active and dedicated skateboarder and surfer, up and down the coast of California, but mostly here in Santa Cruz" for nearly 30 years. Dave stamped concrete textures (in the form of waves and/or faces) around the lip of the two skate bowls. Along with adding dynamic colors and forms to the surface of the park, this proposal also serves functional and aesthetic needs of the skaters, as it provides visual and auditory cues to their movements without compromising the skating texture of the bowls.

Judi Oyama -Concept drawing
Judi Oyama was born and raised in Santa Cruz, has been skateboarding for 33 years (currently ranked first in the World in slalom masters), and is an artist and graphic designer for Giro/Bell Sports. Judi worked with local skate artist Jimbo Phillips and concrete artist David Pettigrew to create the park's strongest visual element, the 18' full pipe. A graphic grey-tone wave illustration was transferred onto the full pipe using sandblasting and other concrete sculpting techniques. In addition to highlighting the wave form of the full pipe and addressing the park's proximity to the ocean, the finished piece serves the functional need of discouraging park visitors from climbing on the wave form.