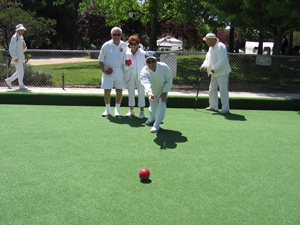 Call the SCLBC at 831-421-9660 for information. Visitors/newcomers always welcome by appointment!

SPECIAL THANKS
Special thanks to the community sponsors and supporters
responsible for the new green.

WHAT CONSTITUTES A WORLD CLASS GREEN?
A 120-foot by 120-foot grass or artificial grass surface constructed of a well drained compacted substrate layer leveled to within 1/8" level every ten foot of surface where the bowl when rolled upon the surface travels at a specific speed to meet world standards for tournament play.

HISTORY OF LAWN BOWLING
Lawn bowling like many games has been with us for centuries.
Some say the Egyptians started a similar game that changed
into Bocce ball (Italian), Pe'tanque (French), and Lawn Bowling
(English).

The English version of this ancient game modified the balls into oblong shapes so when they are rolled they can curve around obstacles in the way of their final destination. Since balls are spherical these oblong shapes internally weighted on one side are now called bowls. It is very important that the playing surface for lawn bowling is flat and consistent in texture. It was found that grass could provide such a surface, hence the playing area has been called a Green.

The Green is 120 feet by 120 feet and up to eight separate games can be played at the same time. One person against one person (Singles), three people against each other (Cut throat), two against two (Doubles), three against three (Triples), and four against four (Rinks). So you can see up to 64 people can play on the Green at the same time.

A game can take between two to three hours to play. Men can play against women, old can play against the young and all have a chance to be on a winning team. Teams are made up by a "Draw" (names pulled out of a hat) to create a variety in day to day play. Besides this the distance to the target changes with each end that is played. The starting point from which the Bowls are thrown may change for each end. The number of ends played may vary. All these makes for a unique fun time for all.

In recent times the surface of the Green has been improved in consistency with texture, speed, and level with the use of special foundation material and artificial sand filled layering to make the bowls roll more precisely. Santa Cruz Lawn Bowling Club is proud to offer such a Green for your enjoyment.