Community-Oriented Policing requires constant adaptation to new needs and changing situations. The Santa Cruz Police Department (SCPD) has embraced innovation since it adopted a community policing philosophy in the early 1990s. Just as then, today’s efforts are about building personal relationships, being proactive in addressing community concerns and working with partners to innovate new approaches to police work.

In this spirit, the department is poised to launch three new or expanded initiatives focused on creating transparency and implementing solutions that produce meaningful results in the community.

The first initiative provides for all Santa Cruz police officers working in the field to be equipped with body cameras starting in 2017.

“Body cameras certainly increase the accountability and the transparency of the police department,” Police Chief Kevin Vogel said. “I think that’s the No. 1 benefit.”

The footage also will provide better evidence documentation, record use of force incidents and encourage good behavior for both police officers who wear them and community members who encounter them.

The department proposed body cameras during the 2016/17 budget planning process, but financial considerations led the city to delay implementation of body cameras. Data storage alone is estimated to cost $100,000 a year.

“This is a pretty costly expenditure for the city,” Vogel said. “One of the things I want to make sure of is we’re very careful and deliberate in the selection of body cameras.”

In addition to choosing the right equipment, developing policies around data retention and storage, when and how to release footage, and how to preserve privacy all will need to be considered as body cameras are implemented. The timeline for rolling out body cameras for officers will be discussed at the Tuesday, Dec. 13, Santa Cruz City Council meeting.

The second initiative begins this month: police officers will carry Naloxone, an opioid overdose reversal drug. The one-year trial phase of the Overdose Prevention Program, funded through a Santa Cruz County-administered grant, will involve 12 SCPD patrol officers who have volunteered to participate.

“The logic behind law enforcement starting to carry it is on these types of calls we’re the first ones to show up,” SCPD Lt. Warren Barry, who is overseeing the program, said. “Minutes and seconds count when it comes to an overdose death.”

SCPD will be the first law enforcement agency in the county to carry a “rescue” drug. The Naloxone is administered through a nasal mist, which is easier to apply and doesn’t require officers to carry needles. Each participating officer will be issued a kit with two Naloxone doses.

“We are dedicated to helping people,” Barry said. “This is a problem where we can’t arrest our way out of it, so we’re treating it like a disease. This is a compassionate response to a nationwide problem.”

To encourage people to call 911 to seek medical attention for an overdose, California adopted a Good Samaritan law, providing immunity from violations and low-level offenses when a person is either experiencing or observing an opioid-related overdose. People who receive the rescue drug or those with them at the time will be given an outreach card with information about addiction services.

“The hope is they will get help and not use again,” Barry said. “Public safety isn’t just arresting people.”

The third Community-Oriented Policing expanded initiative is the expansion of the Maintaining Ongoing Stability through Treatment Team (MOST) program. The MOST liaison assists with calls involving potential mental health issues and provides mental health intervention and assessment services. Originally a 40-hour-a-week position staffed by one person, the role will grow to include a second half-time liaison working weekends.

“The MOST program increases our outreach when it comes to mental health and addiction,” SCPD Deputy Chief Rick Martinez said. “It’s ensures we have that referral system out in the field seven days a week.”

Community-Oriented Policing requires constant flexibility to respond to all emerging issues with proactive problem-solving approaches that involve the community as well as police officers. 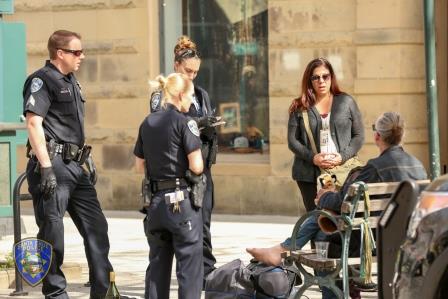 “We have an ongoing commitment to reevaluate our policies and programs, and introduce new initiatives as needed,” Martinez said. “We know Santa Cruz is a special place with unique needs, and we want to be responsive to our community.”